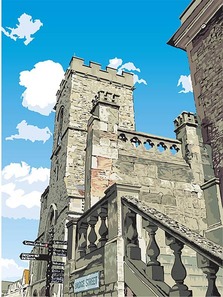 • 1967: Born in Shropshire and grew up in the remote village of Whixall.
• 1986: Studied Graphic Design in Shropshire and the North Wales College of Art.
• 1988: First job as a graphic designer for Chronicle Newspapers in Chester.
• 1990: Drew first published cartoons under the pen-name of Scooter McKenzie.
• 2000: Moved to Oxfordshire and worked for a succession of marketing agencies.
• 2005: Became an award winning Editor of The Messenger; a regional newsletter for Mensa, the high IQ society.
• 2006: Joined Abingdon Artists Society.
• 2007: Set up my own company: Peter Bellingham Illustration and started working for myself.
• 2008: Wrote and illustrated the graphic novel - The Puzzling Cases Of D. Cypher.
• Started Scooter McKenzie's Cartoon Workshops.
• 2010: In the 'Art and Artists of Abingdon' exhibition; my prints showing scenes of the historic town hung alongside those of Turner and Constable.
• 2010: Guest Of Honour at the 56th exhibition by the Société Académique D'Argentan & De L'Orne in Normandy. Exhibited 25 illustrations and paintings.
• 2011: Took part in The Big Draw, a nationwide project to encourage everyone to draw.
• 2012: Invited to give a workshop to students at Christ Church College, Oxford University.
• 2013: Gained 2 multinational clients: Pöyry Management Consulting and Oxfam International.
• 2014: Contributed to a project which was recognised by The World Federation of People Management Associations as one of the five most innovative Human Resources projects in the world, selected from over 2000 candidates in 34 countries.
• 2015: Created site-specific artwork for The Big Draw, the national campaign for drawing.
​A 10 metre long story was exhibited as it was being drawn, stretching out of the second storey window of an Oxford art shop and down to the street.
• 2021: Added animation to the services offered by PBI, including animated GIFs and whiteboard animation. Contributed 8 animations to a presentation for Howard University, Washington D.C.; the university where Vice President Kamala Harris studied.